I was hanging out, looking through my iTunes and having the loveliest time reminiscing about all kinds of crazy things. My daughter even came to join me at one point and we had several good laughs at some of the music she used to love when she was younger (like “I wanna be a Cowboy” which I still think is awesome but apparently I shouldn’t share this information.)

And I ran across the Dave Matthews Band…the only band that I have more albums (yes – I said that word) is The Cure. Um, dark teen from the eighties. Guilty. See?:

Now Dave got me through a LOT. He’s so versatile that you can listen to him when you’re happy, when you want to beat the holy hell out of someone or when you think you’re in love.

In this case, I was wondering if maybe, possibly I had found that someone to complete me. I was with this really hot guy named Kimbo (not that wrestler guy mind you) and we had finished an awesome dinner where every five minutes or so I would envision myself lunging over the candle lit table and raping the man. (I found out later that had we not been in the restaurant, that would have been a very acceptable thing to do. Truthfully, I don’t think he would have cared that we were in a restaurant either but he’s not fond of the idea of being arrested for indecent exposure or otherwise.)

So after we left, he stopped at the corner shop to grab smokes (yeah, the old smoker days. I only miss it sometimes now). I was sitting in the car and Dave Matthews was playing (yes, on CD). It was the Red Rocks Live album. The song was Lover Lay Down.  And it just happened to be right at 2:45. Dave sang to me:

“Could I love you, could you love me?”

I sat in the car, head cocked, watching Kimbo through the window and wondering. Could I love you, could you love me?” 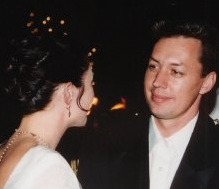 Yeah, I told you he was hot.

And that was almost 17 years ago. And he’s still hot. So, yep. I scored. And I know a thing or two about keeping a marriage not just alive, but fun. Kimbo still makes me laugh like a sixteen year old. And I still get happy when he comes home.

© 2009-2017 Lisa Barry. Unauthorized use and/or duplication of this material without express and written permission from this blog’s author and/or owner is strictly prohibited. Excerpts and links may be used, provided that full and clear credit is given to Lisa Barry with appropriate and specific direction to the original content. Thank you for understanding!
Loading Comments...
%d bloggers like this: